See the full article published in The Chesterfield Observer on Jan. 15, 2020.

Without a doubt, military-created technologies such as satellite, microwave heat, the internal combustion engine and even the internet itself have enhanced modern life.

But few people likely realize the extent to which the military is responsible for saving lives every day in thousands of civilian hospital operating rooms around the country.

Initially developed with the battlefield in mind, robotic-assisted surgical operating systems are now becoming standard equipment in ORs and used in a growing number of medical specialties, including oncology, urology, gynecology and others. Over the past two decades, all three major medical systems in the Richmond area – Bon Secours Virginia Health System, HCA Virginia and VCU Health – have financially invested in robotics units for their hospitals in hopes of streamlining surgeries and improving patient outcomes.

But the technology was actually intended to be used far from America’s shores.

“It was originally developed as a [U.S.] Department of Defense project,” explains Dr. Riccardo Autorino, VCU’s director of urologic oncology. “The initial idea was to use it for battlefield surgeries. The way [robotics] surgery works is that the surgeon is sitting at a console, and then the robot is at the patient’s bedside, so the idea was that you could use the console even if you were not close to the patient.”

That would enable surgeons hundreds or thousands of miles away to operate on a patient remotely. The military, however, moved on to other ideas because satellite and internet speeds were not fast enough to safely perform surgery in real-time.

Autorino speculates that the military could revisit the idea of robotic battlefield surgery with the rollout of faster, more reliable internet speeds using new 5G technology. In the meantime, robotic surgery technology has been appearing in hospital operating rooms since the U.S. Food and Drug Administration approved the first robot-assisted system for general laparoscopic surgery in 2000.

Today’s robotic surgical systems are really an extension of traditional laparoscopic surgery, a form of minimally invasive surgery that gained popularity during the 1990s. Laparoscopic surgery was a major breakthrough at the time, enabling once difficult surgeries to be performed with a few small incisions and the aid of a tiny video camera inserted in the body. Laparoscopy also cut hospital stays and recovery times, since so many procedures could be performed on an outpatient basis.

However, traditional laparoscopy came with some drawbacks. Namely, these systems had limited range of motion and a narrow visual field. Surgical instruments could only be moved straight up and down, or right to left, and surgical images were two-dimensional. The evolution of more advanced robotics systems has mostly eliminated these issues.

“When you move the robot, the instruments are able to move and rotate in a way that they are mimicking what your wrist does in surgery, so now we can turn 180 or 360 degrees very, very easily when we’re doing maneuvers inside the abdomen,” explains Dr. Ramzi Aboujaoude, urogynecologist at Johnston-Willis Hospital. “On top of that, the vision that the robot is providing you is [three-dimensional], so you see better and you move better than traditional laparoscopy.”

“The No. 1 question I get all the time [from patients is,] ‘Do you do [the surgery], or does the robot do it?’” Aboujaoude says. “People think when we say robot that it means an automated machine, but it’s not true actually. The robot we use is fully controlled by the surgeon. We move the instruments of the robot. We don’t let the robot take over and do the surgery.”

See the full article published in The Chesterfield Observer on Jan. 15, 2020. 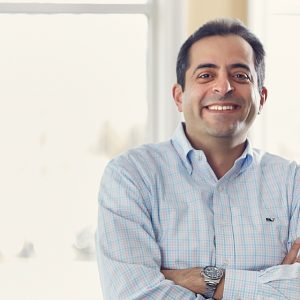 Dr. Ramzi Aboujaoude is a board-certified urogynecologist and OB/GYN, specializing in urinary incontinence and pelvic floor disorders at the Urogynecology Center at VPFW. He is highly regarded in the Richmond community.

What Exactly Is A Urogynecologist?

Why Do You Still Need To See An OB/GYN Provider After Menopause?

Why choose The Surgery Center at VPFW?